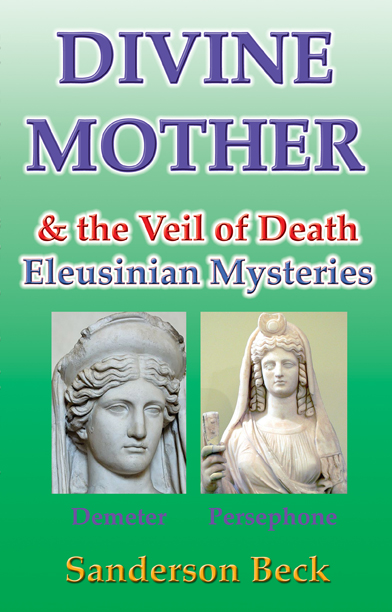 Eleusis and the Goddesses

Origins of Eleusis
Persephone: Maiden and Queen of the Underworld
Demeter: Mother of the Mysteries and the Grain

Heracles and the Lesser Mysteries
The Greater Mysteries: Meeting at Athens
Cleansing and Sacrifices at Athens
The Procession to Eleusis and Dancing
Situation at Eleusis
Fasting and Drinking the Kykeon

Beautiful indeed is the mystery
given us by the blessed gods:
death is for mortals no longer an evil, but a blessing.
Inscription found at Eleusis

Blessed is he who has seen these things
before he goes beneath the earth;
for he understands the end of mortal life,
and the beginning (of a new life) given of God.
Pindar, Fragment 137

The thought here ... shows the connection
between decay and resurrection.
Fruit must decay before new seed can develop....
Here too the fundamental trend
of the Book of Changes is expressed:
the light principle is represented as invincible
because in its sinking it creates new life,
as does a grain of wheat when it sinks into the earth.
I Ching (Wilhelm-Baynes translation p. 500)

But all souls do not easily recall
the things of the other world;
they may have seen them for a short time only,
or they may have been unfortunate in their earthly lot,
and, having had their hearts turned to injustice
through some corrupting influence,
they may have lost the memory
of the holy things which once they saw.
Few only retain an adequate remembrance of them;
and they when they see here
any image of that other world, are rapt in amazement;
but they are ignorant of what this rapture means,
because they do not clearly perceive.
For there is no light of justice or temperance
or any of the higher ideas which are precious to souls
in the earthly copies of them:
they are seen through a glass dimly;
and there are few who, going to the images,
see in them the realities, and these only with difficulty.
There was a time when with the rest of the happy band
they saw beauty shining in brightness,—
we philosophers following in the train of Zeus,
others in company with other gods;
and then we saw the beatific vision
and were initiated into a mystery
which may be truly called most blessed,
celebrated by us in our state of innocence,
before we had any experience of evils to come,
when we were admitted to the sight of apparitions
innocent and simple and calm and happy,
which we saw shining in pure light,
pure ourselves and not yet enshrined in that living tomb
which we carry about,
now that we are imprisoned in the body,
like an oyster in his shell.
Socrates in Plato, Phaedrus 250

For among the many excellent
and indeed divine institutions which your Athens
has brought forth and contributed to human life,
none, in my opinion, is better than those mysteries.
For by their means we have been brought out
of our barbarous and savage mode of life
and educated and refined to a state of civilization;
and as the rites are called “initiations,”
so in very truth we have learned from them
the beginnings of life,
and have gained the power not only to live happily,
but also to die with a better hope.
Cicero, Laws II, xiv, 36

Amen, amen, I tell you, unless a grain of wheat
falling into the earth dies, it remains alone;
but if it dies, it bears much fruit.
Jesus in Gospel of John 12:24

What you sow does not come to life unless it dies.
And what you sow is not the body which is to be,
but a bare kernel,
perhaps of wheat or of some other grain.
But God gives it a body as he has chosen,
and to each kind of seed its own body.
Paul, I Corinthians 15:36:38

Therefore we must ascend again towards the Good,
the desired of every Soul.
Anyone that has seen This,
knows what I intend when I say it is beautiful.
Even the desire of it is to be desired as a Good.
To attain it is for those that will take the upward path,
who will set all their forces towards it,
who will divest themselves of all
that we have put on in our descent—
so, to those that approach the Holy Celebrations
of the Mysteries, there are appointed purifications
and the laying aside of the garments worn before,
and the entry in nakedness—
until, passing on the upward way,
all that is other than the God,
each in the solitude of himself shall see
that solitary-dwelling Existence, the Apart, the Unmingled,
the Pure, that from which all things depend
for Which all look and live and act and know,
the Source of Life and of Intellection and of Being.
Plotinus First Ennead VI, 7

For we believe that there is nothing more important
for man to receive,
or more ennobling for God of his grace to grant,
than the truth.
Plutarch, Isis and Osiris

In humility and with due reverence for their sacred character, may we attempt to penetrate those mysteries, which have been hidden from human view for many centuries, and draw closer to the greater mysteries of which no mortal knows, for the true comprehension of them would imply immortality. I refer to the secret mystical rites practiced by the ancients, releasing from their minds the fear of death and giving them a glimpse at understanding the eternal regeneration of the spiritual life. Of the greater mysteries I may only speculate as to the sojourn of the soul through many incarnations and the inner realms leading to God.

The aim of this book is to present before the reader translations of the ancient writings relating to the Eleusinian Mysteries in Greece. No modern scholars could justly impose their opinion of these most mysterious and holy rites on the contemporary reader as too little is known to give a complete and well-informed picture in summary. The strict secrecy, though practiced for two thousand years, has not been significantly violated, and we shall never know, save through clairvoyance transcending centuries, what the initiates actually experienced in the final beatific vision. Therefore we are forced to rely on the obscure statements of those who were initiated and the ignorant and often prejudiced judgments of those who were not initiated.

For the sake of clarity all quotations from ancient sources are set off from the main body of the essay, while quotations from modern scholars are placed in quotations marks amidst the words of the author. I have relied mostly on the extensive scholarship and research of George Mylonas and C. Kerenyi, and I gratefully acknowledge their work.

Although history, archaeology, psychology, and art have been taken into consideration, my approach in this book is phenomenological, concentrating on the experience of the initiates and the nature of the deities. By itself this book is incomplete and ideally would be complemented with a film showing the site at Eleusis, statues, paintings, vases, inscriptions, etc. The reader is advised to consult books by Mylonas, Kerenyi, and Erich Neumann’s The Great Mother for black-and-white plates.

The Eleusinian Mysteries (and also those of Isis) seem to have been set apart from the primordial mother cults of archaic cultures by their highly evolved spiritual connotations, though they may very well have evolved out of primitive forerunners. Neumann stated that the feminine mysteries of Eleusis were more connected with proximate realities of everyday life than the more abstract male mysteries.

Because of how little is known about these mysteries, their great importance in the ancients’ lives seems to have been passed over by most historians. In many ways the mysteries of Eleusis stand behind Greek religion bound in their secret hearts and veiling their true understanding of death from our notice.

The inner realms of consciousness are hidden from our physical senses, yet their reality may be greater. Alhough the physical changes form and dissolves in natural processes, the spiritual lives eternally.