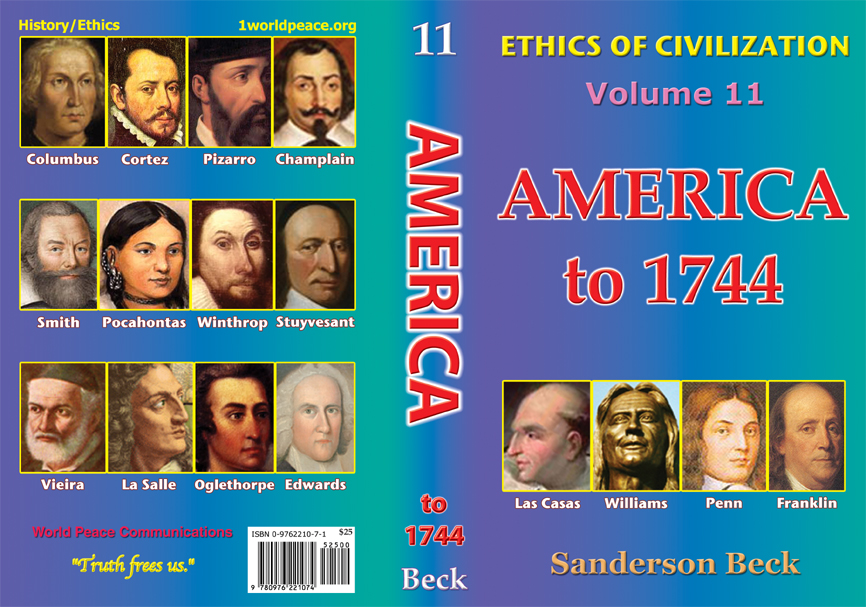 America to 1744 has been published as a book .
For ordering information, please click here.

Summary and Evaluation of America to 1744

Chronology of America to 1817
World Chronology

The origins of civilization in the American continents were much more isolated than those in Africa, Asia, and Europe. Indigenous tribes and nations developed their own traditions that were usually more egalitarian and respectful of women; but the building of cities and the recording of history were limited to a few places, particularly in central America and the Andes mountains. The Mayans were advanced in many ways, but they suffered from wars between their cities until they fell in the ninth century of our era. Quetzalcoatl was a spiritual teacher for the Toltec culture, which flourished in the 12th century. The Mexica (Aztecs) by conquest rose to be a powerful empire in the 15th century that was being threatened with rebellion when Cortes and the Spaniards arrived in 1519. The Incas also became a strong empire in the Andes region; they were known for taking care of all their people so that none would have to turn to crime for survival. They too were weakened by a civil war when Pizarro came in 1532.
Suddenly in 1492 with the audacious western voyage by Columbus that was financed by Spain the rest of the world began to become aware of a “new world” in the western hemisphere. The ensuing conquest by the rapacious Spaniards in the 16th century is a horrendous story of imperialist violence, arrogance, and exploitation along with some effort by missionaries to help the natives while transforming their culture. These crimes along with epidemics caused by the diseases the Europeans brought resulted in a genocidal reduction of native populations wherever the Spaniards and Portuguese colonized. The tales of Columbus and other explorers in the Caribbean, Cortes in Mexico, and the Pizarros in Peru reveal the cruelty of power and greed. The Europeans used steel, gunpowder, and horses to overwhelm resistance to their conquests, and the Christian religion was imposed by demanding conversion, destroying temples and idols, and enforcing dogma with the Inquisition. Only such great reformers as Las Casas in the Spanish realm and the Portuguese Vieira in Brazil offered alternatives that were more just and peaceful; but they were voices in the wilderness among the greedy colonists. When they found that Africans survived better and worked harder than the Indians as slaves, hundreds of thousands were imported from Africa.
Successful colonization by the English, French, and Dutch began early in the 17th century, and they came mostly to North America as well as the West Indies. Champlain founded Quebec in 1608 and was able to develop alliances with the Algonquins and Hurons, but they fought the Five Nations the French called the Iroquois, who were gaining power because of their successful confederation. The French came to Canada primarily to trade for furs or as missionaries. In the 1680s La Salle connected Canada to the mouth of the Mississippi River. The French imported few slaves except in the West Indies and Louisiana.
The Dutch settled in the Hudson River valley and purchased the island of Manhattan from the natives for trinkets. The Dutch had many ships for trading and also governed part of Brazil for a while, but the Portuguese defeated them there in 1654. Ten years later the English overwhelmed New Netherland and renamed it New York.
The English came to Virginia in 1607 to farm and developed the habit-forming tobacco as their main export and currency. They created the first representative Assembly in 1619. In New England religious motives brought Puritans to America as a refuge where they could practice their beliefs. The pilgrims on the Mayflower in 1620 founded the Plymouth colony that made a treaty and celebrated Thanksgiving with the local Indians. Winthrop and the Puritans who founded the Massachusetts Bay colony in 1630 also set up a theocracy, but they created conflict by taking land from the “heathens” and persecuting those with variant religious beliefs. Roger Williams and Anne Hutchinson were banished but established Rhode Island as a haven for religious freedom and the separation of church and state. Virginia, New England, and other colonies had conflicts with Indians that led to hostility and wars.
Pennsylvania was granted to the Quaker leader William Penn in 1681 and became a “holy experiment” in pacifist government as they refused to establish a military. They developed good relations with the local Indians until the notorious “Walking Purchase” grabbed extra land in 1737. The English colonies not only developed legislative assemblies with increasing power but also universities and newspapers. Benjamin Franklin published satires, news, and political commentary; he initiated various efforts to improve conditions. His practical ethics and defense of liberty would eventually lead to a revolution. The plantation economies of the southern colonies and West Indies exploited large numbers of African slaves, except in Georgia, where in 1732 Oglethorpe began another experiment to help the poor while prohibiting the importation of slaves and alcohol.
These and many more stories are told in the fall of the native empires and the development of the various colonies up to 1744, when another war broke out between England and France. Most of this book is factual description, but the last chapter contains a summary and ethical evaluation. The Chronological Index has page numbers for looking up events, and names can be found by using the Alphabetical Index.